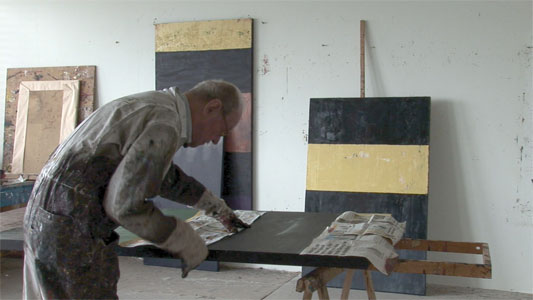  Marcel Schaffner  Dialog with Silence, a film that reflects the creative process in its form. In fragmentary sequences, the film accompanies Swiss painter Marcel Schaffner while he works at new paintings, listening to his thoughts and reasons, allowing the viewer to experience his interest in the visual.

Painting and being  shooting in his atelier, on his yearly trips to Spain, while drawing in his house in Horta, shopping for colors and in his apartments in Zurich.

My motivation: Art became an integral part of my life that accompanied me throughout the long period I spent on the film, working together, among others, with an artist couple such as Fischli Weiss. In my activities as cameraman, filmeditor and filmmaker, I continually evaluate and question, even doubt the power of images. This leads me to ask: What does an image ask of us? And this question motivated me to realize this film.